As Heart of Thorns evolves Guild Wars 2, the open world will be evolving along with it. In the Heart of Maguuma, where the open-world content and story of the expansion will take place, we’ll build on the foundation of the core principles of Guild Wars 2: the power of our dynamic event system, the belief that playing with others makes for a better experience, the impact of environment on stories, and the joy of exploration and discovery. We’re taking all of these principles to the next level in the Heart of Maguuma.

Use this 8% off code: GOLD4FANS

Maps with a Purpose

The Living World set the stage for Guild Wars 2: Heart of Thorns™ in more ways than one. While the story that played out over the course of seasons 1 and 2 set up the awakening of Mordremoth and the story the expansion will tell, the types of maps we added and the stories we told within them have also brought us to where we are with the Heart of Maguuma and the kind of experience the deep jungle will deliver.

The lava-encased remains of the ancient karka are a literal monument to the sheer scale of Guild Wars 2. The Lost Shores event was an epic writing of Guild Wars 2 history, a massive invasion where players and developers simultaneously forged a new play space. We’re not without regret, however, that we can’t storm those shores again.

The ever-looming threat of the sandstorm in Dry Top is more representative of the dynamic, shifting nature of Guild Wars 2—not only for its destruction, but also for its progress. During the sandstorm, the whole of the map enters a secondary phase. This phase affects the map in ways that make it unique from all other maps.

In the deep jungles of Maguuma, you’ll run into similar stories of an even larger scale that occur in secondary phases. For example, the first map you’ll enter in Guild Wars 2: Heart of Thorns will tell the story of some of the survivors of the catastrophic Pact Fleet expedition into the jungle. Through the course of each day, the beleaguered Pact members will try to build up defenses and secure their positions so they have a chance of surviving the night—the deadly second phase of this map, when the Mordrem come out in overwhelming numbers.

In the Heart of Maguuma, there are even bigger threats and more epic battles waiting for you. You’ll find maps with a greater replay value and depth of content than anything we’ve put into Guild Wars 2 before, maps that provide a unique experience and multiple layers of gameplay. Rather than a more traditional strategy of rapidly expanding land mass with limited content to fill it, Guild Wars 2: Heart of Thorns will focus less on total land mass in the expansion and will instead focus on depth of content within that gameplay space. Each map will be rich in content, rich in 3-D play space, and very deep in replay value to ultimately provide more gameplay value to our players and not leave an empty wasteland of rarely played content behind.

One of the new ways we’re enhancing replay value is through our new outpost system, which changes how we structure events in the world. Nearly all the dynamic events throughout Guild Wars 2 are tied to at least a small portion of local characters and lore. As you complete one dynamic event, you will find yourself facing other dynamic events that continue the story of the area you’re in. You’ll see enemies driven back, defeated foes summoning stronger champions to challenge you, and allies you previously rescued now going on the offensive. There are many possible interactions on a number of scales. If you don’t know what you’re looking for, though, it can be easy to miss these stories playing out across each map.

When you first venture into the jungle, you’ll find that events in the area are tied to what’s happening at a specific site. These locations are our new content outposts, which we’re using to bring individual events together into a larger, more comprehensive experience.

Outposts are content structures that broadly explain and contextualize the consequences of localized groups of dynamic events. If you’ve been to the Silverwastes, you’ve seen a forerunner of this concept at each tower. In the Silverwastes, each tower helps the Pact prepare for its assault, and your successes and failures at each tower affect the sort of events you’ll see around you. In the Heart of Maguuma, you’ll have a similar experience with outposts, which are always vital to preparing for the secondary phase of each map. They may even continue to play an important role during that time. 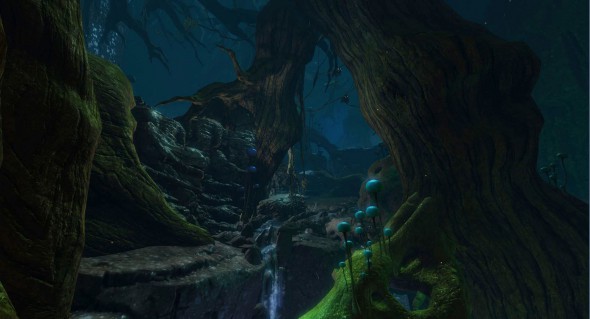 When you come across one of these outposts, you’ll find a story playing out with the NPCs and in events nearby. As you complete that outpost’s events, NPCs will be able to construct defenses, offer new services, assist you on adventures, and ultimately join in the fight against Mordremoth.

One of the first groups you’ll encounter in Guild Wars 2: Heart of Thorns is the survivors from the Pact Fleet. Devastated by Mordremoth’s overwhelming power and fearful of the sylvari who answered its call, there’s little hope that they can survive alone in the harsh jungle. Amidst the chaos, a Pact officer named Laranthir gathers the remnants of the Pale Reavers—elite sylvari soldiers—and struggles to maintain a foothold in the jungle and overcome the survivors’ suspicions of him and the other sylvari.

The first steps are to clear out enough space for the Pact forces to breathe and to organize the survivors. From there, you’ll need to work quickly to capture territory and shore up defenses, driving into ancient ruins to force back the enemy horde. Securing the high ground is key because it allows the Pale Reavers to provide fire support during the second phase of the map—nightfall. When the sun slips below the horizon, Mordremoth’s counterattack begins, and its legions spread across the map. Most dangerous of all are his twisted Mordrem wyverns that rule the skies and ravage the remnants of the fallen fleet. You must fight for every inch during the day at this outpost, because the further you push forward with Laranthir and the Pale Reavers, the more chances you’ll have to bring one of these terrifying beasts down.

As an outpost grows, events change and become even more numerous. The outpost may progress through several levels of strength, unlocking new rewards and more opportunities to explore and play.

By their nature, dynamic events are not always available and occasionally have some downtime. Guild Wars 2 has many content opportunities and challenges beyond events, but most are well hidden. Those that aren’t well hidden tend to be available only once per character.

Adventures are the next level of repeatable, on-demand content challenges in the open world. While events remain the core experience within the open world, players will also unlock adventures as they make progress at an outpost. 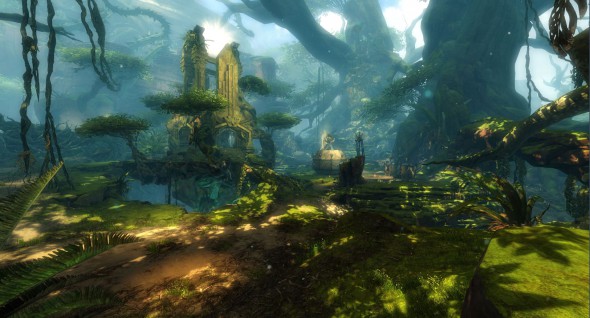 Nearly any activity, minigame, or challenge you can imagine in Guild Wars 2 could be an adventure. The key difference is that adventures have their own UI, much like events, and offer some amount of active challenge. For example, rather than completing a jumping puzzle, an adventure may challenge you to complete that puzzle in a certain amount of time. Unlike events, however, individual performance is tracked and measured. It’s a challenge for you to overcome. Your performance in adventures will be scored, and you’ll be able to see—and test yourself against—the scores of your friends and guildmates. Because adventures take place in the open world, you’ll see other players working to overcome the same challenges as you, and in many cases you’ll be able to work and excel together. Adventures are a reimagining of the concept of permanent content that you can challenge yourself with and enjoy as you move through the world that’s been around since launch. As a result, you may see some activities you heard about before the launch of Guild Wars 2 make an appearance as adventures.

The challenge of an adventure should be in playing it, not tracking it down, so adventures are displayed on the world map. You’ll also be able to tell if you have yet to claim its rewards. Many adventures are unlocked as part of aiding an outpost. If you find an adventure that is not yet available, you’ll be provided with an explanation of exactly how to access it.

One of our focuses in Guild Wars 2: Heart of Thorns is to provide truly challenging content for our players to overcome. Within the jungle, you’ll encounter entirely new species, creatures, and bosses that are more advanced than the encounters we’ve introduced in the past. These encounters will require greater skills and tactics to overcome, whether you’re adventuring through our jungle on your own or with a party. Not only are we presenting these new challenges throughout the outposts and adventures you’ll find in the jungle, but they’ll also be layered across other types of content experiences. As we get closer to the release of the expansion, we’ll come back and give specific details on the new types of challenging group encounters we’ll be introducing to Guild Wars 2 and explain how these new types of challenges work within the Guild Wars 2 content experience.

Adventures and outposts lay the foundation for exploration and confrontation in the open world of Guild Wars 2: Heart of Thorns. Check back tomorrow to learn how these tie into our reimagined progression system, Masteries.